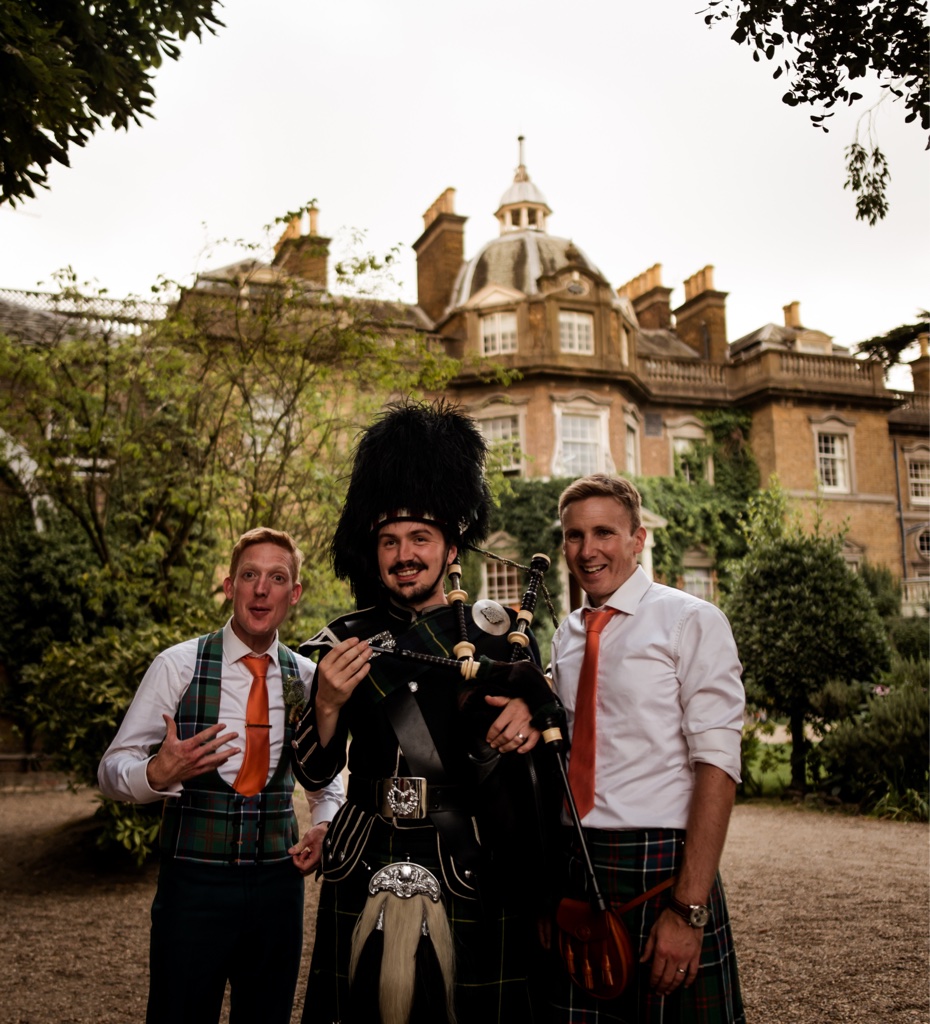 I think it’s fair to say that 2018 was an epic year. Of course, year on year, since I started doing music professionally, each year has got progressively more epic. Yet 2018 really took me by surprise.

The year got off to an inauspicious start actually, with a broken ankle in January and various hiccups – it felt like the year was going in the wrong direction. When suddenly in March the year turned around and I was doing all kinds of amazing things. In the end, 2018 resulted in well over 300 performances – the most I’ve ever done in one year and has taken me to some amazing places.

I’ve played for friends’ weddings, seen nearly 136 couples tie the knot in various different parts of the UK, been on TV, met some incredible people… But most of all, I’ve arrived at a point where I can now devote myself 100% to being a musician, and I can’t express myself adequately on just how utterly amazing that is.

Of course every experience in 2018 was amazing, there’s no denying that. It’s hard to say anything was a “favourite”, but of all the amazing things I did in 2018, I have selected a handful of the key moments.

So in no particular order, here are my 6 highlights from 2018.

Playing at the top of the Wallace Monument

This day was very stressful actually; a car accident on my route caused me a great many difficulties in getting to the venue. However the family and especially the couple were so lovely, forgiving and very appreciative of what I was doing.

Truthfully though, the pleasure was entirely mine. The Wallace Monument! It was a beautiful warm sunny day in June, there was not a cloud in the sky and the air was still. After the ceremony had concluded we climbed to the top of the monument for photos, accompanied with a replica of Wallace’s massive sword.

Playing at the top of the monument, seeing for miles around in every direction and hearing the sound of my pipes carrying off in the wind is probably the most Scottish I’ve ever felt.

One day in April I got a call out the blue – a London number. I ignored it at first and Googled it because I often get missed calls from London and people are trying to sell me something I don’t need. To my surprise, the results said “Avalon Productions”.

So needless to say I phoned back and was delighted to hear that I was needed for a TV programme shoot in Glasgow in early May for a new History Channel series called “Why Does Everyone Hate the English?”, with the remit of playing “God Save the Queen”, “Flower of Scotland” and attempting to play “Jerusalem” on pipes – an impossibility but something that would turn into a gag on the shoot.

So the day came, an early morning jaunt down to Glasgow to commence filming at 9:30 on Buchanan Street. Another unseasonably warm day for Scotland too, something that Al and Fred would remark on.

The first to casually stroll up was Fred MacAulay, like he was out getting his messages for the day. We chatted for a bit and I learned that he regularly spent summers in my native East Neuk.

We three dutifully made our way over to start filming on Buchanan street, with the tail end of the morning commuters ignoring us. The funniest part for me was when an American lady, completely oblivious to the presence of two of the UK’s funniest comedians, handed Al Murray a camera and insisted on a photo with me…

The highlight of the morning truly was the two of them plus some very bemused tourists who came over to get photos with me, didn’t speak a work of English, belting out the “dirty version” of Flower of Scotland up Buchanan Street as I played it on my pipes.

After we’d finished shooting I had a good chat with Al, who as it turned out was involved in the band scene and has a company making marching band drums.

Whilst I only made it to the special features extra content on YouTube, I will remember that experience to the end of my days.

At this point, it’s no surprise to be playing for Americans coming over to elope. It’s something I do often, so I really didn’t give it much thought when a bride called Zibby booked me to play for her wedding.

What I didn’t expect, however, was to learn that Zibby has had quite the career in Hollywood – not exactly an a-list celebrity (yet) but has been in many things that I’ve actually seen.

But what really took me by surprise was when her chief bridesmaid turned out to be Yeardley Smith, an actress whose most renowned role has been as the voice of Lisa Simpson.

Of course I recognised her face – I know her from other things too. So I dutifully went to talk to her (you’re not gonna miss this opportunity, right?). Anyway, it seemed that she was just as excited to meet someone in my outfit as I was to meet her. It helped that she’d had a few sherbets by this point but she was absolutely lovely. So very easy to talk to and genuinely interested in asking me stuff too.

At her insistence, she made a video message for my brother.

She also told me (again, a little bit inebriated) that she was trying to avoid someone because (quote, unquote) that person was “a bit of a c*nt”. It’s hard to not imagine this in Lisa Simpson’s voice.

I also met Matthew Lillard that day – he was in attendance too. A very tall man in real life, which I remarked to him, and his reply was:

Playing pipes in London for the first time

In July I embarked on a big adventure to London to play for Gordon and Andy’s wedding at Hampton Court House.

The venue itself is a private school during the term time and becomes an exquisite venue in the summer. Right across the road from Hampton Court Palace, of course.

I trekked down at silly o’clock that morning to catch my flight and took what felt like a year long bus ride from Heathrow to Hampton Court. One of the scorching hot days of the year during London’s drought, it was baking hot even first thing, never mind in the middle of the day when I was wearing several sheep worth of wool.

Enjoying a light breakfast at the Hampton Court cafe, I toddled across to the venue and spent the rest of the day there, intriguing the half English and half Scottish audience with the bagpipe tradition and sweating half my bodyweight away in the process, all whilst operating on a few hours’ sleep.

After the day was done, I walked back across to the hotel in nearby Teddington – only a mile’s walk across a lovely park where I saw families of wild deer, and the next morning up at stupid o’clock again to catch my flight home for a wedding the very next day.

The rededication of the Dundee Police War Memorial

Thanks to one of my students, Sandy, I found myself being the lone piper at this ceremony. It was 96 years since the memorial was unveiled, and with 2018 being the centenary of the end of WWI, Sandy put his heart and soul into preparing this.

He spent 2 years researching the names on the memorial, gathering their stories and assembling it into a booklet for the day. He also arranged for the memorial’s refurbishment and got Police Scotland involved.

My contribution to the day was actually very simple – lead the guard of honour around from the police station and play a few tunes before leading them back again. The cold kept getting the better of my pipes’ tuning and I had to play the retreat march “When the Battle’s O’er” at twice the speed at the end to keep up with the marching police, but truly what an occasion and very memorable indeed.

It had a lot of parallels with doing the “Battle’s O’er” event on Armistice Day when we (myself, Sandy and another student Lachlan) returned to the same memorial at 6am to play the same tune to commemorate the end of the war 100 years previous.

Both experiences were very humbling and made me very proud for very different reasons; the latter being that the two guys playing alongside me were only playing bagpipes because I had taught them from absolute zero to arrive at that point!

The launch of Kilted Sax

Of course, this is an ongoing thing. After all, I’ve been playing sax for almost as long as I’ve been playing bagpipes. It took me a while to get the bagpipe side of the business up and running before I devoted my attention to something else, but actually, like the bagpipes, the saxophone side of things has taken me by surprise at just how quickly it’s caught on.

With me finally choosing a name for it in the summer and then investing in two very nice new saxophones, it’s fair to say that the saxophone aspect is providing a creative outlet for me that I have been unable to achieve with the bagpipes alone.

It will continue to develop, of course, and I look forward to seeing where that goes, but it’s made me feel very happy to succeed in bringing another of my musical interests to fruition.

The most interesting thing I’ve done with the sax, I feel, was playing a bride down the aisle to “The Imperial March” on my tenor sax.

My final performance of the sax was on Hogmanay in 2018 and I found myself performing music that was a far cry from the days of playing in high school in the wind band where we used to do stuff like Grease or West Side Story; I was standing in the middle of a dance floor with several inebriated, scantily clad women gyrating around me playing cheesy 90s dance tunes. 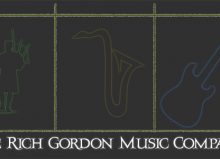 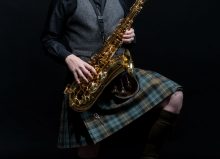